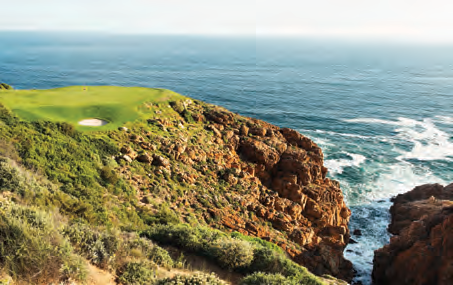 Trip of a Lifetime

Firstly, I wish to thank David McMahon of Premier Irish Golf Tours for giving me the opportunity to join him on what they call in the Travel Industry a “Familiarisation Trip” on Golf and Safari in South Africa. The trip of a lifetime with spectacular wildlife and World Class golf. For my money, Fancourt Golf Resort in George is the best golf resort I have ever had the pleasure of setting foot on – and I’ve seen a few. More of that later!
What can I say about the beautiful and sunny South Africa! South Africa offers a full variety of once in a life time opportunities for those looking to experience its treasured wildlife and beautiful country. Diving with Great White Sharks, on Safari with “The Big 5″or some of the best golf in the World, South Africa has it all.
And for Vera – I’m used to Michelin star food now so time to up your game!

A huge benefit here was a night-time flight where we managed to catch some sleep. Only one hour time difference meant there was no difficulty adjusting to local time. Picked up at Tambo International airport at 1pm before heading north to commence the first part of our trip comprising of Golf and Safari and both Legends and Zebula Golf and Safari Resorts. Autumn in Africa is a little different to home and we were greeted by a warm and sultry afternoon in this African Wilderness. After dropping our bags to our rooms, which were luxurious in the extreme – par for the course in South Africa,  we headed to hit some golf balls off the turf frequented by a variety of native wildlife. After sharpening the tools for the games ahead we were treated to our first dinner at what could be described as a tree house. A little surreal to be listening to African Lions under the trees as we devoured a feast prepared by means of a traditional South African “braai”. On the second night we had a fantastic meal on the roof of the club house. The crystal clear, night sky providing the perfect backdrop to a beautiful meal with new friends on a balmy African evening.
The golf courses in Legends and Zebula were spectacular in their environment. Legends Golf and Safari have the Signature Course and the Tribute course. The signature is a stunning design and has a variety of tees to suit everyone from beginners all the way to tour standard. Every hole has been designed by a World star. Ironically it was our own Padraig Harrington’s tenth hole which put my round in reverse after turning in 32(-4). An eight on the hole swatted away the notion that I was ready to go on tour. The Tribute course is a ten hole par three course that has copied the design of the most famous Par Threes in the World. It includes replicas of the Postage Stamp, The Twelfth and Sixteenth at Augusta and of course finishes with The Seventeenth from Sawgrass. Great fun! Game drives in the evening and morning were majestic with the Big 5 on show. Lions, Elephants, Cheetah, Giraffe and Buffalo all roaming the game reserve in their natural habitat.
The only disappointment from the trip was the helicopter for The Extreme Nineteenth was out of commission the morning we were due play it. This is a par three with a tee that can only be accessed via helicopter and measures 550 yards. It looks amazing. The resort assured us this was very unusual for the helicopter to be grounded, so until next time. I rather cheekily informed friends I had a three at the hole but omitted to tell them we played from the base of the mountain to the green shaped in the African continent.
http://legendhospitality.co.za/
After a couple of nights stay in Legends we left for Zebula Golf Estate and Spa. Another exceptional resort offering a mix of wildlife and golf. The Cheetah and the Elephant experiences were spectacular. The golf course was also superb. The greens were fantastic, and while the fairways, as was the case in Legends were not of typical resort standards, this was entirely appropriate considering you were likely to see Zebra, Springbok and Wilderbeast grazing the fairways as you played through. A truly authentic African golfing experience. The cuisine here was exceptional. I had Ostrich which was not entirely unlike fillet steak and by all accounts cholesterol free. Maybe we should start farming them here? On the second night we enjoyed another “braai” in our palatial lodge at the resort.
Four days at two superb resorts and an average temperature of 30°C. On day five we moved on to Johannesburg for a connecting flight to Capetown.

The expected drop in temperature did not materialise when landing in Capetown. A beautiful blue sky and 28°C on arrival. An amazing city with a spectacular Marina area. We stayed at the modern and chic Table Bay Hotel located on the popular V&A Waterfront. Table Bay Hotel boasts luxurious rooms with views of the bay area as well as the beautiful mountain range of Table Mountain. A simply stunning hotel. We had an evening off in Capetown and dined in one of the many local restaurants on the Marina. Once again the food was exceptional and great value. A trip to long street and a visit to some of the local bars gave us a great feel for this African metropolis.
No trip to Capetown would be complete with out trip up Table Mountain. A stunning day out with views over a most historic landscape.
From Capetown we made our way to Hermanus. For me the most stunning location we stayed at. I even forfeited the opportunity to play golf for an encounter with a great White Shark. I seem to be repeating myself but a once in a lifetime experience. We stayed in two hotels while in Hermanus. The boutique Marine Hotel was simply stunning. Eleven professional tour operators asked to fill out appraisals – without exception all informed me they gave the Hotel ten out of ten for everything. The Harbour House Hotel, next door, not to be outdone must surely have the most idyllic setting for breakfast. There is some very good golf in the vicinity at Arabella Golf Club and Hermanus Golf Club, which a couple of chickens in the group decided to play instead of swimming with the fishies.

Leaving such a stunning location was tempered by the fact that we were taking the Garden Route to the golfing Mecca of the Western Cape.

A night at the luxurious Oubaai Hotel Golf and Spa awaited us after our trip up the Garden Route.  This 5 star hotel occupies an ideal position between the Indian Ocean and the majestic Outeniqua Mountains in Herolds Bay, George. Again the food and accommodation were spectacular. Due to a busy itinary we did not get to play on Ernie Els home course but a tour was sufficient to highlight the quality of a spectacular golf course. Oubaii is in the heart of the golfing hinterland that is the Western Cape with Pinnacle Point and Fancourt in close proximity. Indeed for a return trip any of these resorts would be ideal for a base for a purely golfing holiday.
The Conrad Pezula was our next stop where, once again, service, accommodation food and hospitality was second to none. Nine holes in the morning on a stunning golf course set us up for fantastic golfing climax to our trip. There was however one last Safari to sample. From here we went to the spectacular Gandwana Game Reserve. An unbelievable close up encounter with Rhino, Hippo and best of all a pride of Lions in their natural habitat capped a fantastic safari. Nervously we had a picnic in the bush not far from where we had the Lion encounter. Exhilarating
Pinnacle Point. What can I say. The golf course I had most looked forward to and it sure did not disappoint. The location, the course, the clubhouse, hospitality were all world class. The old saying, “a picture says a thousand words” applies. Think Old Head in 25°C.
Fancourt – I cannot begin to explain how blown away I was by this resort. To be honest, for some reason I expected it to disappoint, I think because it was coming after Pinnacle Point. How wrong could I be. Don’t get me wrong, Pinnacle Point is spectacular, but Fancourt for me has the edge due to the variety on offer. Two stunning hotels, two Michelin Star chefs, tennis courts, more swimming pools than you can shake a stick at, world class practice facilities, not to mention three spectacular golf courses. World class service and accommodation to boot.
We played two of the golf courses. The Montagu is breathtaking in its beauty. While the Links gets all the plaudits, I have to admit this was out of this world. I cannot thing of any other place where I could shoot 88 and walk off the course with a smile on my face. For me this was the best parkland golf course I have ever played.
The Links at Fancourt is ranked the 25th best golf course on the planet. In this writers opinion would comfortably rub shoulders with Royal County Down, the number one ranked course. From an engineering perspective, what they have achieved with this golf course is spectacular. Built on an old airport runway, I can fathom how they manage to produce such a stunning gold course. There are so many good holes here it’s hard to pick favourites but the par fours third, tenth and fourteenth stick out while the tee shot of the tips on eighteen has to be one of the most daunting tee shots in Golf.
An unbelievable trip. I can’t say much more only “Get on the bacon and cabbage Vera!”.
Until again, South Africa!