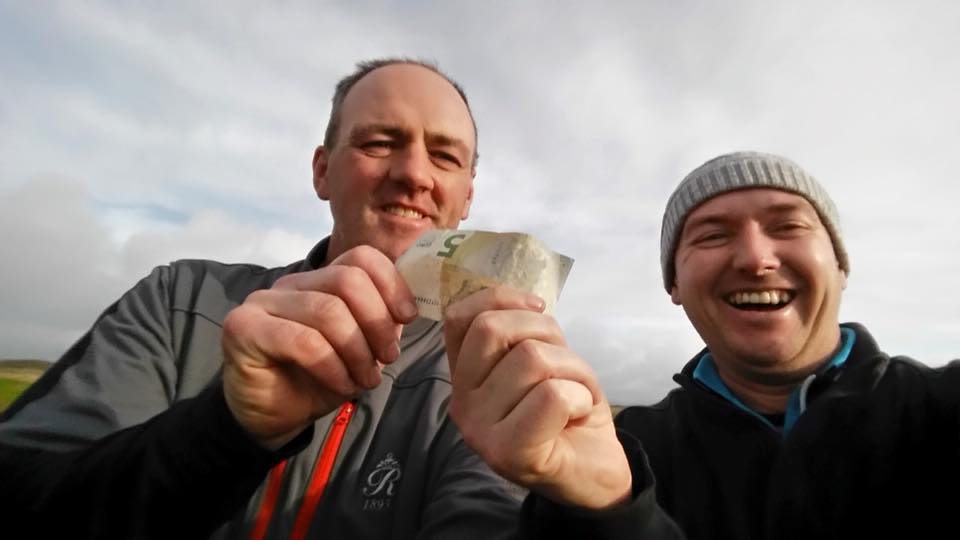 First of all, thanks to David Mortimer for his recent tuition which assisted me in procuring that rarest of currency “The Cavan Dollar”. Lou Reed sang a song about this once upon a time, in  “Perfect Day”. In that song he advised us “you’re going to reap just what you sow”. With this in mind I’ll assess my own practice regime down through the years and look at how the experts suggest it should be done.

The road to hell is paved with good intentions someone once told me. Well there is no doubt a string of collapses down the stretch on 2016 reflected this. Disastrous finishes in the East of Ireland, Irish Mid-Am, Mullingar, Galway and Castlemartyr Scratch Cups were a combination of a lack of confidence and poor technique due to the neglect of the practice ground. An 83 in the final round of the Irish Mid am to squander an overnight lead and lose by three, followed by blowing another overnight lead in Mullingar were just a sign of things to come. Relinquishing the lead after round one in Galway after leading, taking a treble bogey 6 at the final hole and a finish of 6,9,4 in Castlemartyr to lose by 4 further emphasised the flaws. All these collapses were unavoidable and as unpalatable as it may be, you do indeed “reap what you sow”.
I have never been one for “digging” it out however during my most successful years (2005 to 2007), hours and hours were spent chipping and putting. Also I would have played quite a bit of early morning or late evening golf with two balls working on small things. The driving range and practice ground however have always seemed a chore and a combination of laziness and boredom has by and large kept me away from such places.

Times they are a changin

“You better start swimming or you’ll sink like a stone”, apt words indeed by Mr. Dylan in his classic “Times they are a changin”. I’m probable setting myself up for a fall here (as usual full of confidence) but the new regime is in place. One hundred ball four times a week, four trips a week to the gym and daily stretches! Time constrains with work and “The Noticeboard” present the biggest challenge but “2016 lets be havin ya”! Early days and lessons and swing changes for an old dog are bound to be a dodgy business but it is sink or swim time with my golf.
As suggested earlier, I have never been one for “digging it out” but with the expert tutelage of David Mortimer and the use of drills, I intend to keep my practice more focused. In the past trips to the range would be largely unproductive due a lack of focus and a lack on knowledge. Hopefully the motivation that follows from the disappointments of 2015 will be maintained with days to remember like my recent excursion to Connemara Golf Club with one of Cavan’s favourite sons.

The late David Bowie tells us ” Imagination could make a man of you”. There is no doubt that success is all about belief. It’s practically impossible to be successful in anything unless you believe! Again, returning to my most successful years on the golf course I continuously imagined winning amateur events and indeed the manner in which I would win. Playing upcoming events in my mind before I ever arrived at them. I had a West of Ireland victory speech written six months in advance. Winning two and three scratch cups a year, winning and competing strongly in senior championships, winning Senior Cups and Barton Shields were all borne out of the belief that they could be won. Imagining the victories in advance was crucial. For the past number of years for a variety of reasons, I couldn’t imagine winning anything and of course subsequently have not succeeded in adorning the trophy cabinet. With a renewed vigour for the game, I am hoping some prophetic thoughts will begin to re-emerge. This in turn will breed confidence.

Before signing off for today, if anyone is interested in participating in an upcoming project here on Golf Noticeboard called “Operation handicap” please get in touch. This will entail writing a short blog once a week to let us know what you have been doing in an effort to improve your game and as such reduce your handicap! Whether it be golf lessons, fitness, nutrition, feng shui, kinisiology, psychology, hypnotism, whatever floats your boat etc., we want to hear about it! Ideally we are looking for five golfers of varying handicaps so others can follow your progress – similar to operation transformation except for golf! Eddie McCormack – you can follow me!
Also if anyone wishes to get involved in our expert guest series, don’t hesitate to get in touch.
That’s it for this week. Feel free to comment below or on our Facebook group.
For now, regards to all,
Joe.