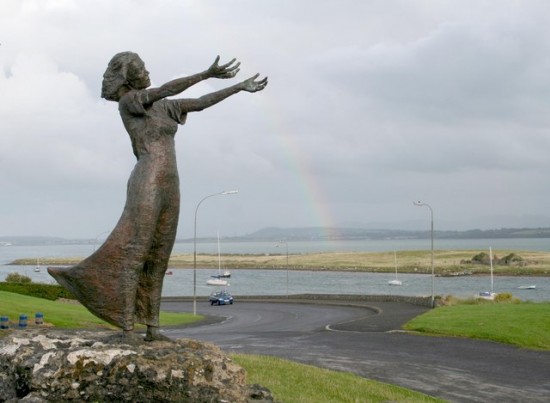 Time to wake up and smell the Rosses!

“The hour has come for you to wake up from your slumber, for our salvation is nearer now than when we first believed.” , Romans 13;11. I think some of us may need salvation after a winter of discontent!
That time of year when we login to golfnet and fill out our entries for the first Championship of the season, “The West” at County Sligo Golf Club. After a miserable winter it marks a bright spot on the Horizon with some competitive golf in the offing in the not too distant future. That being said, as we all know, Rosses, particularly at Easter can be an hostile environment. Before any of my friends from County Sligo golf club get offended, I refer of course to the weather which can be testing to say the least. I can hand on heart say I would not like to be anywhere else on the planet during Easter than at the West of Ireland in Rosses Point. Ditto for the South at Lahinch. Recently I have been accused of making Joe’s blog a little too much about Joe, which I have to take on the chin, however this is the stuff I live for, so it’s not meant to offend. Just the mutterings of an amateur golf fanatic who was brought up on tales of amateur greats that went before us.
An early Easter means it’s just five weeks to the season opener, which means it’s well past time to get off the posterior. Indeed the green eyed monster in me is looking on enviously at fellow competitors who are on the Iberian peninsula at present competing in the Portuguese and Spanish amateur championships. Well for them. I may live to regret this but “will it prepare them for a 20mph Northerly in Rosses Point at Easter? Perhaps more so than my psyche would like to admit.
The rest of us mere mortals are cranking up preparation at home. Alliances are the order of the day and after an horrendous spell of weather, the Mid Western Alliance seems set to get the go ahead and kick off on Sunday. A big thanks to Seamie McEnry and David Foley for putting together this season open series which helps us get back into the swing of things. Indeed it has become a highly competitive winter/spring series in the last number of years with quality golf needed to be in the shake up on the final Sunday.

The golfing Union recently conducted a review of Championships and there have been several changes to championship formats. The one change that appears to have been unanimously welcomed by players is the decision to make match-play draws entirely based on qualifying scores. Up to now, the draw has taken place behind closed doors and there is little doubt that players were seeded in sections of the draw. A huge bug bear for many, which has thankfully now been addressed. At this years West of Ireland, qualifier 1 will play qualifier 64, qualifier 2 will play qualifier 63 and so forth, Qualifier 32 will play qualifier 33.Qualifier 1 and 2 will be at opposite sides of the draw so cannot meet until the final,  This is the basis for the draw going forward and introduces a level of transparency that can only enhance the integrity of the event. Lets hope other provincial championships follow suit.
Over the coming weeks I have no doubt I will ramble on a bit more about the West as the event draws near. I am looking forward to reviewing the course development which by all accounts is pretty substantial.
Thats it for today. More self obsessed ramblings on Thursday.
If anyone wishes to write some guest blogs, by all means drop us a line here at joe@irishgolfnoticeboard,ie.
For now,
Best wishes to all,
Joe