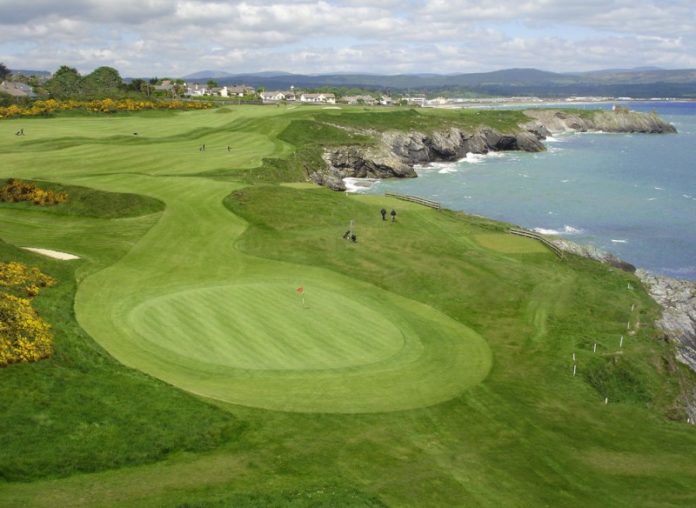 A Captains Day to remember

Thanks to Declan Long from Wicklow Golf Club for recalling the following story, I think you’ll agree this is a very unique sequence of events. I’ll let Declan take it from here!
“In Wicklow Golf Club the biggest news of 1986 was the famous 1-2-3 in the Captain’s prize competition in the summer of that year. The event occurred on the 289 metre, par 4, fifth hole in a three-ball consisting of Sean Connolly, Billy Earls and Pat Teahan.  What happened when the three players drove off the tee will forever be remembered in the annals of club history. The Irish Independent recorded the event as follows:-
“Ball 1: Sean smashes a drive down the middle and the ball rolls on and on …… to finish in the hole for a dramatic hole-in-one.
Ball 2: Billy Earls reduces the hole to a two-shotter, scoring an eagle.
Ball 3: Not be outdone, Pat completes the set with a “mere” birdie.
Albatross, eagle, birdie – the feathers were flying, and though it’s a relatively short par four, what are the odds of achieving this sequence on the one hole? Despite their feat, none of the trio could capitalise on their little bit of magic” This is believed to be the only 1-2-3 ever scored on a par four hole anywhere in the world and the feat has been widely publicised on television, radio and the press.”

Thanks to Wicklow Golf Club

Thanks to all at Wicklow Golf Club for their enthusiasm for the club of the month competition. There is no doubt that the course is spectacular and U for one will be making it my business to play there at some stage this summer. It baffles me that I have never heard anything about the course. I am reliably informed the greens are usually in immaculate condition also. So I look forward to meeting some of our Noticeboard members when I get up there for a game during the summer.
We will be running our club of the month competition this weekend, so alas, Wicklow’s time is nearly up.
If you like what you see here, feel free to post a comment below or on our facebook group